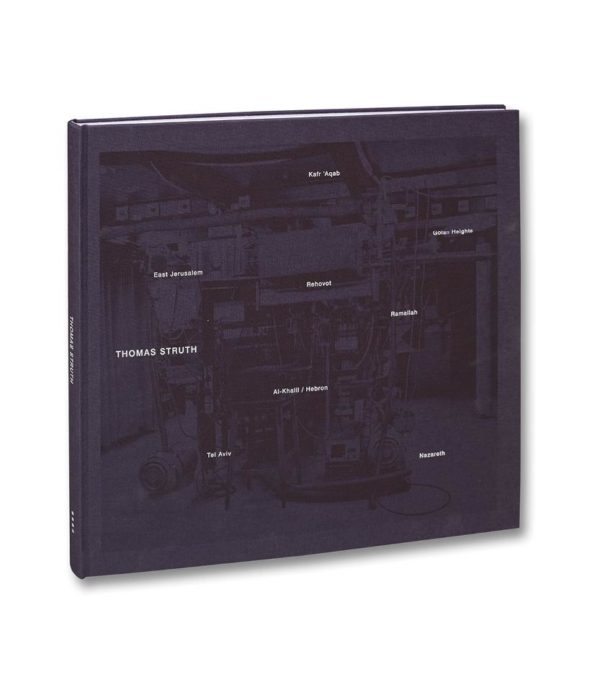 “The irreconcilable coexistence of two nations determines every aspect of reality… No image exists that overcomes this division.” – Ulrich Loock

This book brings together sixteen photographs made by Thomas Struth in Israel and the Israeli-occupied West Bank in 2009, 2011 and 2014. Struth continued his practice of creating singular images, each within one of the strictly segregated subject fields he has developed through his career: street photographs, portraits, landscapes and photographs of high technology. Each image carries the enduring complexity and visual distillation of human experience for which Struth is known. Approaching the sheer diversity and quiddity of the inhabited world, he attempts to represent what he has referred to as “a particle of the conflict of the region”, to photograph, fragment by fragment, the conflicted political and social landscape. Ulrich Loock proposes in his essay in the book that this series of images is unified by “strata of antitheses [which] reveal themselves as a matrix running through the work”, as Struth attempts to grasp the circumscribed reality of a region where coexistence has failed, a reality that is inaccessible to photography.

In some ways, this extraordinary body of work is a departure from Struth’s traditional practice: all exposures are related to one single geographical and political reality, as if Struth found every aspect of his photographic vision in one place, and as though Israel and the West Bank were a geographical container for the scope of the human condition.

German photographer Thomas Struth (b. 1954) is internationally recognised for his wide-ranging work, which includes photographs of cities, landscapes, portraits, and architectural interiors. He trained at the Kunstakademie Düsseldorf (1973–80), and, during that time, he was the first artist in residence at the P.S.1 Studios in Long Island City. From 1993 to 1996 he was the first Professor of Photography at the newly founded Hochschule für Gestaltung, Karlsruhe. He has exhibited all over the world, and a large number of monographs have been published of his oeuvre, including Thomas Struth: Photographs 1978–2010 (2010), and Thomas Struth: Unconscious Places (2012).